(my sister was born in the 'old' house now a barn). My nickname was and still is "Tsiganka" meaning gypsy. The family lore goes that a wandering gypsy came begging at the door and instead of begging for her daily bread she had a baby in her big gypsy bag.

As I grew up I liked to believe that story. My family
moved to the USA. We flew on a big airplane. We had
never seen a banana before. The stewardesses fed us
one. They gave us toys. We had never
had any toys. We played with the goats (and the sheep).
(Insert laughter)

Or at least I did. I still have a thing for them and
seriously considered buying a truckload of goats in
India on a recent visit to save them from their fate. My driver put
his finger across his throat when I innocently asked
where my little friends were going today.

I was a poor immigrant child for a while then I grew
into a misfit Yugoslavian immigrant young adult then I
blossomed into a full fledged dysfunctional adult.

Then through yearning and longing I found spiritual life.
Started reading.

Standing on my head.

Then at the age of 35 I took off on my big adventure and left the
planet (USA) and went to Germany to work in advertising. BUT
the real reason I went there was because of an Indian
Goddess that lives in the forest and gives her
blessing in silence and people from all over the globe
come to a small village in Germany to kneel before Her
and look into Her eyes.

From the first day I looked in Her eyes my whole
previous life was to be washed away in the flood of tears that
came streaming down my face. I had never seen anything
like it. I had never known anything like it existed.
But I was certain I had waited my whole life to be in
the presence of it.

Reentering the noisy concrete pavements of the USA again,
I started to long for the abode of Her silence.

During this period,
I had many dreams of pregnancy.
Nine months later, against all odds I got a job and moved
to Germany. And gave birth to my dream.

I Lived. Worked. Suffered. Sat in Her Light. Had the
most amazing experiences. Had the hugest challenges.

Climbed the roughest mountain.
Once I finally reached the top,

I jumped off and went to the foot of the next highest peak.

Landed at the abode of The Highest Peace,
Sat at the feet of my SAT GURU for six months. Lived in
an ashram. Donned a sari. Washed dishes. Scrubbed floors.
Meditated. Met people from all over the globe.
Did six months India six USA for three years.

Then,
Came back and suffered beyond words.
Felt insane.

In the insanity of the transition and fluidity
of the experiences girl skirt mission was born.

Then...
Integrated. Adjusted. Claimed my own.

So here I now sit. In my yoga clothes.

"Story of the Skirt" building of the skirt mission. 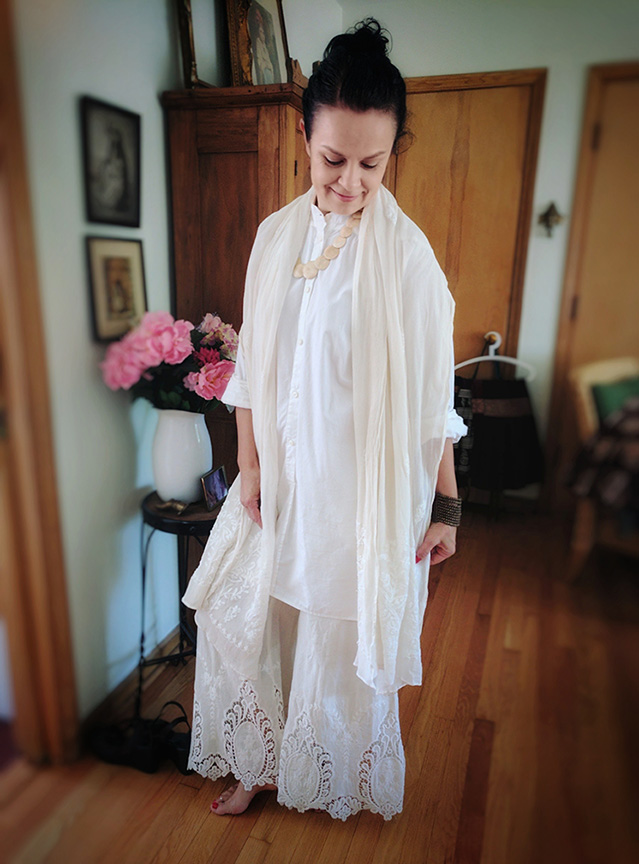