Story of the Skirt 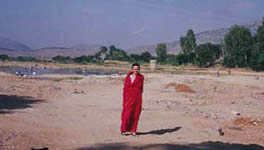 The Story of the Skirt

•     The girl skirt mission was born from one skirt in one suitcase coming back from India after an extended ashram stay.

•    The first girl skirt mission skirt was discovered hanging for sale in a hair salon of a small remote village in India. It then chose to multiply in multitudes of colors and various expressions of its magnificence.

•    The girl skirt mission name was conceived in meditation with the three words visually coming together to form a very interesting domain name.

•    The girl skirt mission mission statement, "I want to take over the world. And do it with a skirt. To teach it Love", came from three sentences pulled from a long email sent to a yogi friend in Bosnia and written in the passion of the moment as a true sentiment.

•    Mick Jagger and the Rolling Stones visited the wholesale shop where the skirt fabrics are produced in India one week prior to the skirt mission's first visit. The shop owners did not realize who they were until they left but did sell them some kurtas.

•    Not being able to cope with the Western world and material life and the thought of doing a business after many years of living a single pointed Bhakti life the skirt mission was almost abandoned before it truly began.

•    The few original samples of girl skirt mission garments were carried around and shown reluctantly in a tearing Whole Foods brown paper bag.

•    The only reason the skirt mission was not abandoned before it began was due to a dream in which the Guru came and simply said: "Stay in worldly life".  All doors were to spring open after that.

•    The girl skirt mission was conceived and nurtured in one room with one bed, one laptop, one dream and one altar.

•    The first words put on paper in an attempt to define and give birth to the mission were "I have a dream and it's wrapped around a skirt". It was done at the kitchen table.

•    Bringing the girl skirt mission products to the US took 2 years 4 trips to India, three factories, two potential investors, a few headaches and one angel.

•    The manufacturers of the girl skirt mission pant fabrics had never previously sold their goods to a woman nor had a Westerner ever walked through their door.

•    The manufacturer for the girl skirt mission pant fabric in India was found after a single bicycle was spotted on a crooked narrow road, stacked with colorful orange fabric bicycling to a factory.

•    The Milijana name is a birth name given within the rolling hills of the former Yugoslavia by a grandmother who wore long gray braids rolled under a babushka, had one proud tooth to chew her meals and lived through the second world war.

•    This beloved grandmother who was nurturer and mother and a survivor and knew all her flock of sheep by name was killed in the raging war between the Croats and the Serbs in the former Yugoslavia.

•    The girl skirt mission's main aim is to serve as a reminder that Divinity is the essence of all living beings. 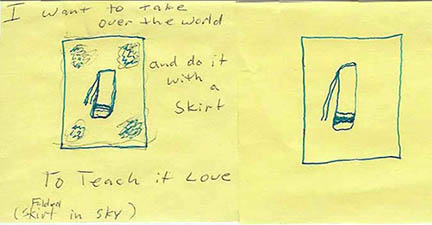 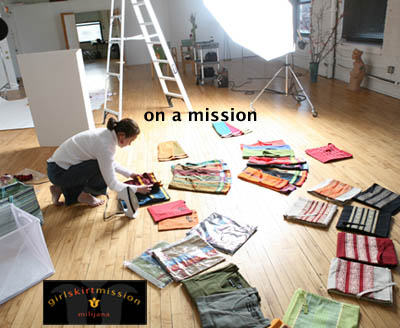